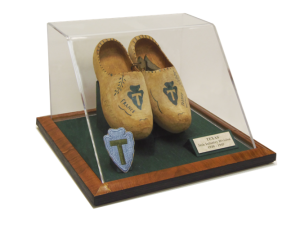 Emily George is an avid WWII history enthusiast and knew about the 36th Infantry Division with the arrowhead unit patch. This division is a Texas National Guard Unit that was originally formed during WWI and has continued as a unit today. It was the first American combat unit to land in Europe. The unit was sent to Italy and made its way to southern France. They spent 400 days in battle and accepted the surrender of Field Marshall Hermann Goering. Fourteen men with the 36th Infantry Division were awarded the Medal of Honor for their WWII service. It had the ninth highest casualty rate of any Army Division in WWII. Thank you, Emily, for
sharing this incredible piece of history with us. 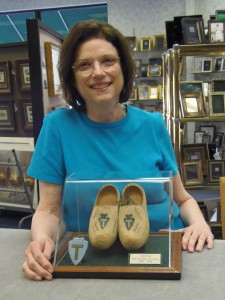 “I found these wooden clogs on Ebay for about $12. The name “Ernie” is inscribed on the sides. I have often wondered if Ernie was the soldier who decorated these clogs or was Ernie one of the soldiers who did not make it back to Texas. There were no other bids on these shoes.”
-Emily George