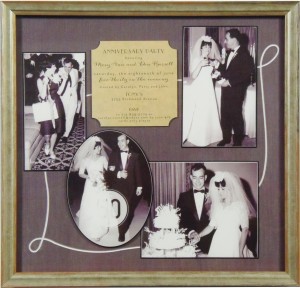 There is no better way to celebrate a wedding anniversary than with a party! Mary Ann and Don Russell were married on June 18, 1966 and celebrated their 50th anniversary this past June. Their three children threw them a party at Tony’s restaurant where friends and family joined for a celebratory dinner. They decided to frame their anniversary invitations with wedding photos as a thank you gift for each of their children. Congratulations Mr. and Mrs. Russell, may you have many more years to come.